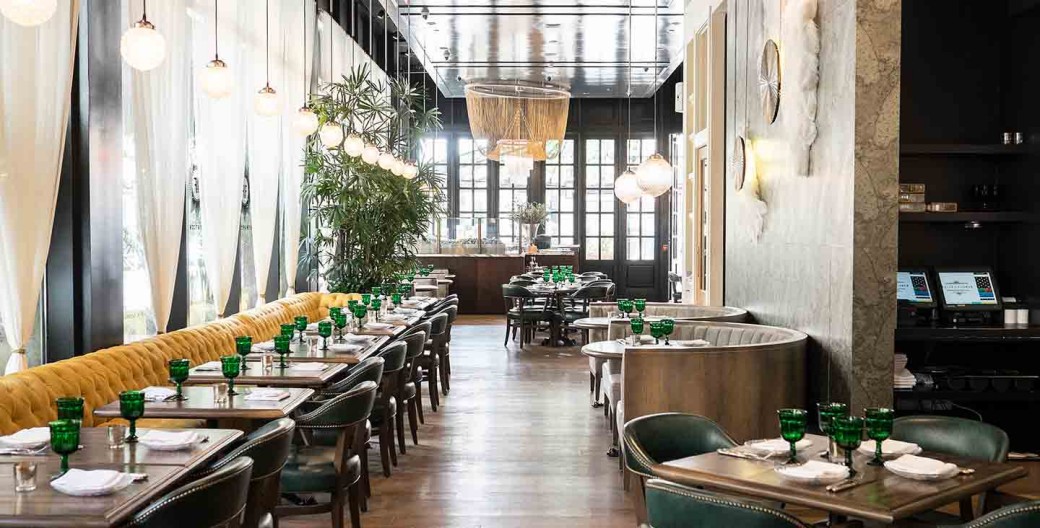 It must be said. I picked Faith & Flower for the first “official” Boozy Mommy Brunch because I have been SO wanting to go there. Miss Sarah Ro and I were joined by another amazing BoozyMommy and can I just say we had a ball!

For starters- the hostess (having her first day and just about the sweetest person possible), seated us, and then let us move when I realized that all my gear wasn’t going to fit in a booth. (I also noticed another patron who was pregnant and had a stroller with her was gifted deviled eggs for the inconvenience when they moved her from a booth to a table to better accommodate her stroller- talk about service!). The waitress has NO snark about the fact we were in a nicer restaurant and had two babies attempting to expose our boobs to the restaurant. She helped set us up in a highchair and clear the area around it as well since JL believes that any silverware on the table is up for grabs. She and her manager also responded within a half of a second when we decided we needed a second high chair for baby RM too.

On the not mommy side, a part of me loved being treated like a real human being and having oysters and booze offered without a grimace at JL. I decided to order the signature Milk Punch (Sarah ordered their peachy mimosa- which I’ll let her cover in her review) and it was divine. I am a huge fan of milk punch and have had one at another LA eaterie that does NOT do brunch and I haven’t been at since JL was born so it’s up in the air as to if you’ll ever get that review- more later! F+F Milk punch was NOT what I was expecting. It’s clear first of all- and secondly it doesn’t taste anything like my other milk punch. But its layered, and boozy, and smooth, and could easily sneak up on a mama- so I had one. We all ordered different things (62 Degree Egg (me), Sunny Side Up Eggs (SarahRo), and Eggs Benedict Pizza (BoozyMommy #3)) and kind of shared around. Faith + Flower prides themselves on bringing things to the table as they are ready and that they are up for sharing kind of plates. We shared- but best believe I got down on that 62 degree egg. If you don’t care for your eggs runny- then this is NOT for you. JL even nibbled on the pieces of bread I gave him and reached for more. If you go- you MUST order their Braised Bacon. The three of us ladies (and JL too!) all politely decided to share bacon, because when is bacon bad? (If you’re a vegetarian/flexitarian like my sister I’m sorry- but this is who I am. Meat and I have been together longer and I don’t see that relationship changing so spare me your lecture and order another milk punch). The bacon isn’t really bacon- more of a pork belly of deliciousness. Its crispened in a champagne glaze, and melts in your mouth (hence my willingness to share with JL who promptly gobbles it up- I knew he was my son (as if the stretch marks dont prove it)). Seriously. You must order it.

Mom-side? I can only imagine as a brunch location it would be good for slightly older kids given how attentive the wait staff was to our two boys and the baby and pregnant mother at the table next to ours. They quickly accommodated the stroller, and the tables weren’t directly on top of each other so my mom-hips were spared that embarrassment. I can’t vouch for a kids menu or crayons, but JL enjoyed the bits of food I gave him and I would imagine that a restaurant that serves eggs with such finesse could probably make a basic scrambled egg happen as needed.

Bottom Line- I would absolutely recommend Faith + Flower if you are looking for a beautifully decorated oasis in Downtown LA. It is on the splurgier side so it will likely not become my weekly brunch side- but for the first “official” BoozyMommy outing? It was so worth it! So Los Angeles, you’ve got some big shoes to fill- but we’re coming for you!