But for me, it’s hard not to be constantly aware of my C-Section-the bright pink scar that almost cuts into the shooting star tattoo I got when I was 18 (bad idea) is a constant reminder of the day my life was forever changed.

Before having RM, I thought I wanted to go the “natural” route- you know pushing him right out of my vag. And I put natural in quotations because I think having a baby is natural, any way you do it. My husband and I took an 8 week course on childbirth. We read. We prepared. I was okay with getting pain meds the second I didn’t feel good. But my birth plan was basically, you know, we’ll see how it goes.

On my last day of work before maternity leave, my work friends threw me an ice cream party and I packed up all my personal items and I went home. As I usually did after work, I immediately took off my bra (aaah) and put on comfy pants.  I was taking a little rest on the couch, trying to will myself to get up and make dinner, when I felt severe pain on my right side, under my ribs, that very quickly radiated throughout my abdomen. The pain was immediate and so intense that I knew something was wrong. From what I heard, labor pains ramped up slowly. This happened in a second. 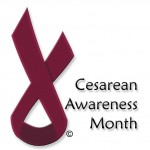 I knew I had a cyst tucked up high under my rib cage kept in place by my uterus. It’s called a Corpus Luteum Cyst- an ovarian cyst that develops during pregnancy but is usually absorbed in to body as the pregnancy progresses. Mine, however, kept growing. It was always a possibility that it could rupture, but I made it 37 weeks and 6 days without it happening. When that pain started, I knew my cyst had ruptured.

I called my husband who was at work and I called the hospital and they told me to come in. Waiting for my husband to drive from work in Friday rush hour traffic was the longest 30 minutes of my life. I tried to do some deep breathing. I tried not to panic. When he got home he quickly and silently packed the car with my hospital bag and yoga ball. He was scared as hell. He never once let me know it though. Driving to the hospital was the worst car ride. I swear he hit every bump and pothole on the way. Owwwww…

By the time we got to the hospital, I was in so much pain I could barely breathe and I was whispering to the nurses. They got me set up in triage and the on-call Doctor came to do an ultrasound and to check to see how dilated I was. Half an inch. He said this was normal pre-labor and was about to send me home. SEND ME HOME!! He said this could last two weeks. Uh, hell no it won’t. I had mentioned that I thought my cyst burst, could that be causing my pain? (Um, hello, it says it in my medical record…) After another ultrasound, some more Doctor consultation, they said that my cyst had ruptured, was causing my abdomen to fill with fluid and my uterus to become irritated and start contacting, that I could lose my ovary, and oh yeah, emergency c-section RIGHT NOW.

I was scared and tired and couldn’t breathe and was in shock. This was happening. I was having a baby and major surgery all in one! Then I got some morphine and all was right with the world. Ahhhhhh…

They wheeled me into surgery, where they gave me a spinal. It was so quick and painless. I had ananesthesiologist  and a nurse anesthetist who walked me through every thing, and at that moment they were like angels to me. I had to consciously stop my self from trying to wiggle my toes. It’s a really frightening experience to not be able to move. 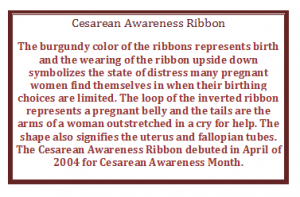 The surgery itself was mostly uneventful. The baby was out in minutes, they showed him to me over the partition. He was so smashed! Cute but smashed. He went to the warmer to get cleaned and my husband went with him. He had some trouble breathing at first but they got him going. During that time, they took out the cyst, suctioned all the fluid, and sewed me back up. They handed me the baby as soon as I was bandaged and off we went to recovery. It was less than two hours from the time I walked into recovery to the time I was holding my sweet, sleepy, smashed-face baby. (His face eventually unsmashed and he’s literally the cutest thing ever now)

My C-Section story is an unusual one, not common, but still all mine. It’s how the most precious thing in my life came to me and I would not want it any other way.  Scar and all, I love every part of it. I can’t remember what the pain felt like now, so that’s probably why!