Let Me Spoon Feed It To You

We’ve now hit that stage where JL believes he’s ready to eat. And I am so modern and cool that I have decided to go with the self-led weaning method. Which I lovingly refer to as the “my kitchen floor, his high chair, and most importantly my child are a hot mess within 5 minutes of dinner starting” phase of life. A HOT mess. Thankfully I have two dogs who are fine sitting at the edge of the kitchen/dining room until I give them the okay to come in and clean the floors for me. (Until I can afford a Roomba these two will have to do).

I am all about empowering JL to do what he wants to do, and be the big boy he so desperately wants to show me he is. Which means Amazon recently grabbed up another $40 of my money after I scoured mom-blogs for the best of the best spoons for babies and read product reviews and research etc. Below you will find my reviews and JL’s recommendations- take em or leave em, but I can say that if I can save you the $40 of buying spoons and Amazon suggesting all sorts of other spoons you might want. So. Many. Spoons. (And because I love the ‘Zon, I will include the links for your purchasing pleasure).

Spoon Feeding the Best Spoons to You 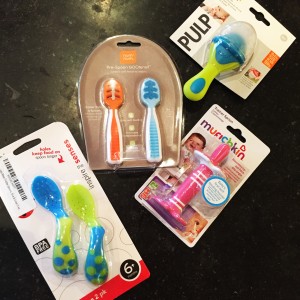 The Nominees for the BEST Spoon Award are…

1.  The Munchkin Trainer Spoon (mine is pink in the photo since I didn’t have the brilliance to READ when it said “colors may vary… oh well. Real men like pink)
2.  The Boon Pulp Silicone Feeder (not technically a spoon but it was pretty highly rated and people seemed to love putting blueberries in it… which I would do if JL didn’t already eat them whole and spit out the skins for me… again- oh well)
3.  The Sassy Less Mess Toddler Spoon (also available in pink/purple OR green/blue and very clearly marked as to what you’re getting)
4.  The Num Num Dips Set (their slogan says it isn’t a utensil its a goo-tensil and I was most excited to try these)
* It should be noted I ordered a final contestant, the Fisher Price Training spoons, which were not delivered in time to be a viable candidate… Maybe another day when I feel like making JL re-enact the hunger games of toddler spoons they will be reviewed** 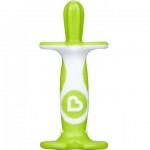 Despite the fact that the spoon was PINK (which was a huge let down for me since I thought it would be green- but JL didn’t seem to mind at all), this “spoon” was the most visually interesting. Does it look like a spoon? No. Does it scoop like a spoon? No. Why is it considered? Because it popped up a few times while I was shopping around. The training spoon is formulated to fit in baby’s chubby little hand and let them truly get a good grip on it. The rubber nubbin at the top is meant to have food stick into it (presumably) so that your perfect cherub can easily navigate it to their mouth. What that means for mom who has been using a spoon so long it’s second nature is that I felt a sadness that I had flushed the $5 for the spoon down the drain since I couldn’t imagine the time it would take for me to use this spoon in a practical manner and feed him.

He could. JL was immediately into this one and clutched it like it was his best friend (of the 4 laid out on his high chair table). He sucked on it (like a nipple/bottle), gnawed on it (again same comparison but this time I think he was massaging his little incoming fangs), and then he stuck it in the sweet potatoes and back in his mouth. Was it a huge bite? Nope. Was it actually him doing it himself? Yup. 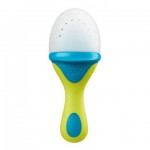 Visually, not a spoon. But I tried not to hold that against it. This spoon was ignored mostly by JL until I added a little bit of the steak that mom and dad were having into the silicone pouch. GAME CHANGER! I have been trying to figure out how to incorporate more meats into his diet, but they’re not quite as easy as say…. a blueberry, for him to eat. So I do what I can. He very much enjoys eating steak niblets and crawfish bits. This was a nice way for me to give him the flavors and pieces, without being so concerned he was going to choke on them.

Downside is it is also shaped like his toy maracas which are used in the most entertaining game of all, “I throw- You get!”, so as you might imagine the boon spent a few rounds on the floor when the allure of steak was no longer enough for him. 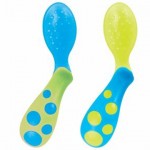 No reviews at all on Amazon. Nothing. So how would I know? How could I be certain? Well at $11 for 2 I was hoping that this was going to work and I wouldn’t just have useless spoons everywhere. Of the contenders this one looks the most like an actual spoon. While I had my doubts about the sense in holes in the head of the spoon, they didn’t really leak the food or cause any kind of issue. For me, they were a little tricky to angle correctly into feeding JL, but again- we were here to see if he could do it himself. And he could. He gripped it and popped it right in with no trouble. The angled head was VERY helpful to that extent. Now, was he able to quickly scoop up the sweet potatoes and get them in his mouth? He’s 9 months old. If he gets a quarter of it in his mouth I’m fine. This spoon is definitely my favorite of the bunch. It fits into his hand and actually has the potential of allowing ME to feed him as well. 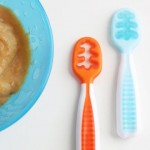 Fun fact. The bullets above are from the product descriptions (if you hadn’t noticed by now) and below these bullets, Amazon has added in a warning label that there are small parts and this is not recommended for children under 3… Which is great since I was hoping to teach my child to feed himself around 22….

All jokes aside, I was most interested in these originally. Fancy, cutting edge, sleek- I could just see me as the envy of all my friends while my pristine child ate and looked as docile and well groomed as the model children. JL loved this spoon (again not a spoon, more like a paddle) because it weighed the least and he could throw it the farthest- a point much appreciated by the dogs as well. This spoon didn’t really cut it for me in terms of self feeding. It was plenty easy for me to use to feed him, but I think it was just a little too light weight for him now. So back into the drawer it goes until he gets a little more adept with his motions.

The Verdict: My favorite was the Sassy Less Mess and his was the Munchkin… Both are seen below. 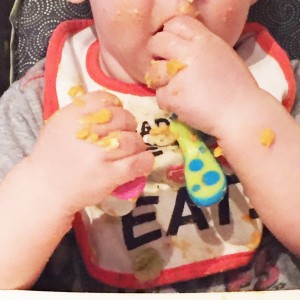 And there you have it folks… My foray into the eating field and the anthropological study of children’s spoons. Join me on my next safari into the untamed jungle we call motherhood!
And for any of you mothers out there who have done self led weaning, I would love to hear your opinions/tips/tricks! Until then- I’ll just be over here mopping the floors twice a day- NBD.