We go to Jack’s more often than I’d like to admit. I once got take-out for lunch, then came back with the family for dinner.

They also serve breakfast AND have a happy hour on weekdays. It’s really one of the only decent restaurants in our area, particularly when you’re looking for a “nice” place for visiting family, birthdays, or any other special celebrations. However, it’s not so nice that you feel uncomfortable bringing kids. 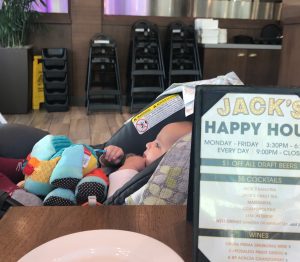 We had never been for Happy Hour, so my sister and decided to try it out. And they did not disappoint. First off, they are always so nice, even when my kid is being a tiny terror. They always talk to H and Little G, and seem genuinely excited that there are families there. There’s always plenty of room to maneuver and park a stroller and there are always high chairs and boosters available. 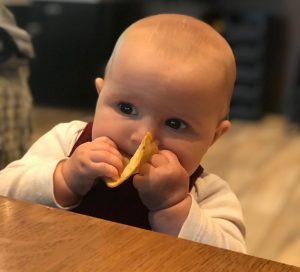 The food is very homey, but just nice enough that you don’t feel like you couldhave made it yourself. For happy hour we had a Greek flatbread (YUM!) and housemade potato chips. The chips were delicious and, as an added bonus, were useful as teethers for my baby. We debated whether we wanted to get more food, and thankfully we said yes to some boneless buffalo wings. They were crunchy and juicy and spicy and salty and everything you want while drinking boozy beverages.

Speaking of boozy beverages, let’s get to the good stuff. I’ve decided to rate the beverages on a scale according to my favorite boozy mommy: Lucille Bluth.

Alright, here’s how it works: I’ll rate each drink on a zero to five Lucilles scale. Zero being practically water.

I don’t understand the concept, and I won’t respond to it.

And five being enough to get even Lucille drunk.

So here we go! 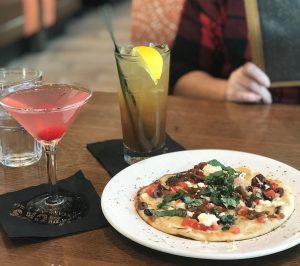 Round one included my first ever (!!) Cosmopolitan and a Jack’s Sweet Tea for my sister. Both consist mostly of alcohol (great picks for a happy hour menu), and neither paired particularly well with our flatbread (but that’s nobody’s fault but our own). You can tell by the color of the Cosmo – this shit was boozy. I rank it a solid 4.5 Lucille Bluths. It only loses the half point because it did have some sort of non-alcoholic mixer. This drink was strong, so it’s a good thing I only had one. The Jack’s Sweet Tea was a little more balanced, and my sister even went back for one more before switching to beer later on. I rank it at 3 Lucille Bluths. Lucille would probably think it was just glorified juice, but she also wouldn’t say no to it. 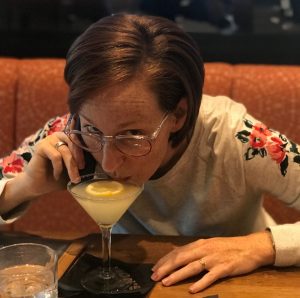 I don’t get out much.

After my very boozy Cosmo, I was definitely feeling the “happy” in “happy hour.” Since my husband and kid were still hours away, we decided to go for round two. My sister had another Jack’s Sweet Tea, and I went for a Lemon Drop. Frankly, anything with a sugared rim is not going to appeal to Lucille, and this fruity business was definitely more sugar than booze. I scored it at 2.5 Lucille Bluths and prayed not to get a headache in the morning. We finished off our appet-dinner with some buffalo wings, which were the perfect amount of spicy and salty to counteract the tooth decay of the Lemon Drop.

This place might not be fancy enough for Lucille Bluth, but it’s definitely good enough for me and my kids. Cheers!