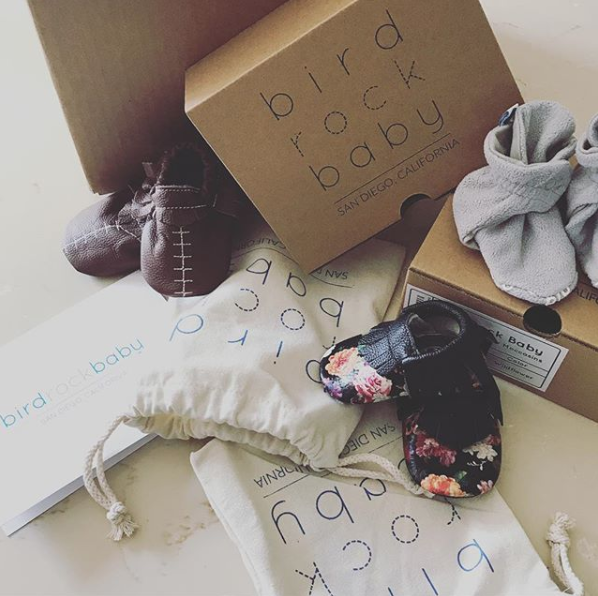 So one of the really cool things about running BoozyMommy is that I get to make some amazing partnerships and meet other amazing mamas. Recently, we came in contact with another amazing mom set… okay okay, their husbands are a part of the company too, but one of the mamas at birdrockbaby reached out to us and asked us to try out their products (baby moccasins). So we figured, “Hey, we have babies – we could do this”… Often it just means snapping a photo for Instagram – and as well all know “Pics or it didn’t happen”, so we can manage that. So we told our new friends over at birdrockbaby to send us some moccasins and we’d try them out.

Well, here’s the thing… We LOVED their product. We loved them so much that we’ve even ordered more! To be honest, I was a huge skeptic because well, my little one’s feet are enormous and the odds of fitting in moccasins has always been a “never gonna happen” sort of thing. Coupled with the fact that most baby moccasins aren’t really in the budget for me (one pair of shoes or 2 cases of diapers? hmmmm) and it seemed I would never get to reach my goal of super cute shoes on my little one while he crawled around in my immaculate white living room (ha! a girl can only dream of being Insta-perfect right?!). But I was wrong! Not about the immaculate living room, but the shoes! They fit him perfectly and he didn’t immediately beg to have them taken off. Talk about a win-win! So I gave it a few weeks and he was still happy as can be and the shoes held up! So I went back to the website and ordered more shoes only to discover a few things…

So if you’re in the market for truly the most adorable moccasins (seriously – go check their Instagram), we at BoozyMommy highly recommend not only these shoes, but also the company and the people who make them.